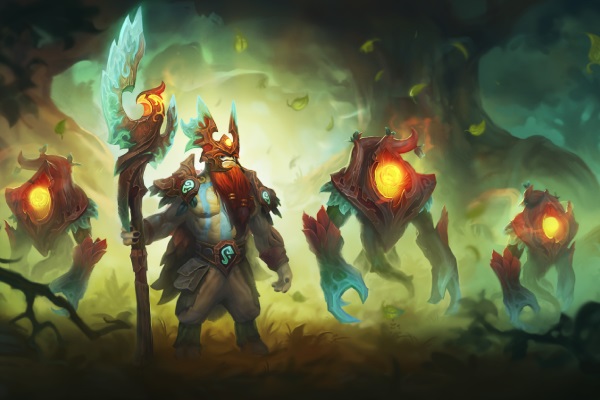 Any time Icefrog introduces a sweeping change like new or tweaked abilities for every hero, my theory crafting juices get flowing in earnest. Here are some of my favorite additions to the game since the Aghanim’s Shard patch of 7.28.

First, I want to clarify the phrase “favorite Aghanim’s Shards.” What I mean is that these are not only high impact in theory but also viable in practice. Keep in mind that an Aghanim’s Shard is effectively 1400 dead gold because they provide zero stats. They also become available at 20 minutes into the game, which is often a critical moment for team fight action to be ramping up. Heroes buying a Shard instead of items that allow them to effectively take or defend objectives can be a big issue in a very similar way that going for greedy items like Hand of Midas can be easily punished. Aghanim’s Shards need to be fundamentally important to the hero without delaying that hero’s timing too much to be viable.

A great example of this principle would be Wraith King’s Aghanim’s Shard, which effectively gives the hero access to a former Talent Tree option, removing mana cost on Reincarnation. At first glance, this Shard seems amazing because we used to have to wait until level 20 to combat mana burn. In practice, however, there are many games where buying a Black King Bar nullifies the mana burn while also providing damage, strength, and immunity to disables. As you can see, it’s not quite as simple as seeing mana problems ahead and buying an Aghanim’s Shard. The reality is that Wraith King should probably buy the Shard at some point against a Diffusal-Blade-carrying Phantom Lancer, a situation in which BKB loses a lot of value but buy that BKB instead of the Shard against a Quas/Wex Invoker. In both cases, you’re combatting mana burn but need to approach the problem from a more global perspective.

Once upon a time, Track gave movement speed to everyone on Bounty Hunter’s team. Since patch 7.20, Icefrog has pushed the Track benefits down a much more selfish road. This has caused the hero to fall mostly out of the meta. Bounty Hunter is a hero that provides almost nothing to team fights and relies entirely on information gathering and snowball potential to be a consistently viable pick. With the Aghanim’s Shard, both of these aspects have been significantly buffed.

By purchasing the Shard, you now get extra information, thanks to AoE vision, and your teammates have greater chasing potential to run down valuable Tracked targets to snowball a lead. Bounty Hunter is also a hero who often ends up with a surplus of gold, perfect for buying an Aghanim’s Shard. In the supportive role, Bounty doesn’t need to rely on high stats to survive and can usually afford to invest 1400 gold fairly early on in the game into a luxury item.

This is definitely one of the weirdest Aghanim’s Shards in the game, and usually in Dota, weird tends to be powerful.

Earthshaker’s playstyle hasn’t changed much over the years, and his current popular item build as a position four is extremely straightforward. Pretty much everything after Tranquil Boots and a Blink Dagger is icing on the cake. and that's what makes me so excited for the potential of this Shard. Earthshaker is not a hero who relies on stats to survive and can easily afford to invest the 1400 into a Shard once he has his core items. Fissure has always been one of the best stuns in the game due to its range and ability to hit multiple units. The Aghanim’s Shard effectively gives you multiple Fissures on a lower cooldown and means that Shaker can chain stun multiple units without having to jump into the action. Adding in a bonus like free pathing to a hero that relies on positioning sounds like unbelievable value as well.

Mirana’s Shard does something I wish more of the Shard bonuses would. The hero has always been versatile but lately has trended more and more into a supportive role. By picking up the Aghanim’s Shard, you suddenly have the potential for a huge spike in right-click damage. There has been plenty of experimentation with this carry-esque build in the past, and ever since the introduction of the Shard, it has shown great promise. Mirana has many different item needs, so buying the Shard has some risk and one that only mid or carry Mirana’s should realistically consider. That being said, I am a huge fan of any Shard that enables a hero to potentially redefine its role and adds huge flexibility to drafting.

For Nature’s Prophet players, nothing is more satisfying than watching your enemies struggle to keep their towers alive as your Treants and allied creeps chip them down to rubble. For Nature’s Prophet players, no item in the game achieves this end better than the Aghanim’s Shard. What sounds like a very small bonus (only TWO Greater Treants?) is a lot more valuable when you dig a little deeper. Not only are these Greater Treants three times as tanky, but they do four times the damage and attack 60% faster. One Greater Treant can solo kill an entire creep wave and two, with the support of an allied wave, can almost entirely kill an undefended tower.

The truth is, by buying the Shard you are able to create split pushing pressure on the cooldowns of both your Sprout and your Nature’s Call. Additionally, few heroes are able to accumulate gold at the rate of Nature’s Prophet and even fewer have the freedom to itemize in almost every conceivable way.

This is probably a pretty hot take but we are not far enough removed from the oppressive power of 7.27 Sven to forget. Yes, Sven no longer gets a free hit when his Aghanim’s Scepter Storm Hammer connects. Yes, this is an additional 1400 gold that you would have to spend to hit that critical timing where Sven can kill everyone without any counterplay. Yes, Sven’s damage in God’s Strength was nerfed. However, I think we can all agree that Sven’s problems in a game of Dota almost entirely come down to getting kited and being able to escape his initial jump. With the Aghanim’s Shard, you can still entirely counter all of the items that once gave Sven problems. Furthermore, it’s hard to imagine a better hero to flash farm that additional 1400 gold required to hit this power spike. Sven is definitely not the same hero he was in 7.27, but considering how amazingly broken he was then, I’m amazed that no one has really experimented with him in the current patch. Also, keep in mind that you don’t have to buy the Shard on Sven, you can now take a Lifesteal talent instead and use the Shard as a reaction to the other team buying Ghost Scepter and other saving items.

Obviously, there is quite a good bit of value there considering the large price tag on some of these items. Huskar’s Aghanim’s Shard gives a much earlier option to counter regen based lineups or heroes. Huskar is also a hero that can be quite tanky with very few items, and this can help justify his purchase of the stat-less Shard. I definitely think that there could be some issues farming the item or disrupting his build path that might be solved with a role switch or some further experimentation—definitely one to keep an eye on as the meta develops.

Aghanim’s Shards offer the opportunity for even more divergent build paths for many heroes, at least in theory. At this point there just isn’t enough data on the item and its impact to say which Shards are actually viable or overpowered, but we can at least speculate on the ones which have the most potential. What has been your favorite Shard so far? How can OD shard not be your favourite? /s

Shadow Shaman should have been in the list.Good article btw. Weaver. That extra geminite attack on leeched targets made me a few comebacks. MK shard is pretty good too to split push Clinkz shard should at least have been mentioned. And also Lifestealer's shard, which is his previous ability but a little-bit improved... I'm biased, but Jakiro's shard is so nice. Another source of slow and DPS, plus it is very effective on late-game Strength heroes that generally were able to shrug off your magic DPS at that point.