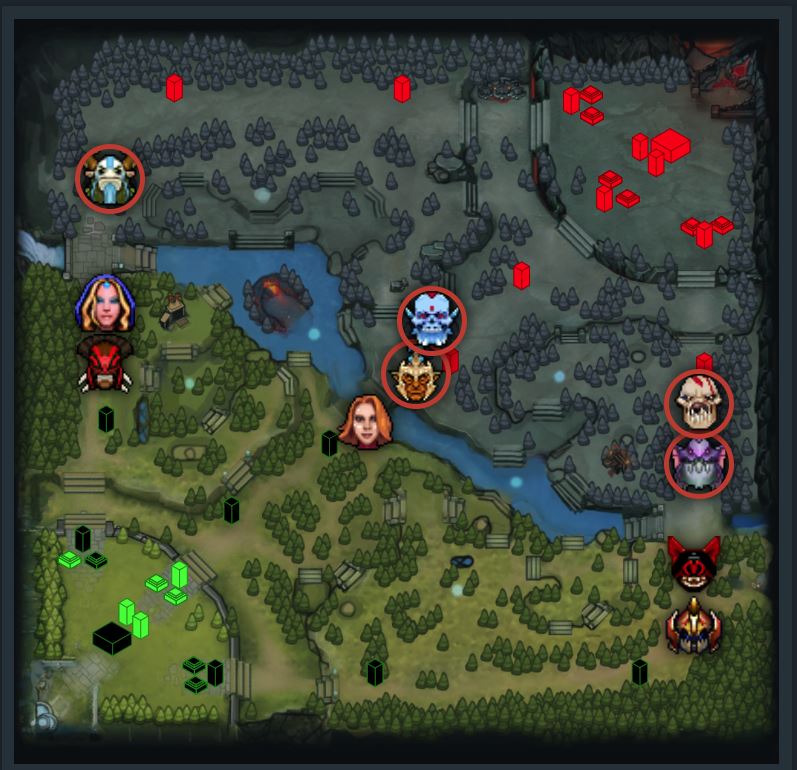 The laning stage seems as important as it has ever been, Lich’s dominance in both pub and pro play certainly emphasizes that. Coming out on top of the laning stage is imperative to secure a strong mid game and some line-ups depend on a good laning stage. Drow Ranger line-ups thrive on early momentum to take towers and map control and without an early advantage, these heroes and line-ups can fall off quite significantly.

As important as the laning stage may be though, it can be quite difficult to gauge how far ahead or behind one actually was in a game. Item timings and last hits can be an indicator of how the laning stage went for both teams, but there are many factors to consider. This is where our new feature comes in.

All TrueSight parsed matches will have indicators as to who won the lane, highlighting net worth, experience, deaths and towers taken. Outcomes are determined by looking at your performance in relation to that of your opponent, so as much as this is about showing you your own performances, it should also raise your own awareness as to how your opponents tend to do in lane and how to better react to tough opponents.

Every match parsed by TrueSight will now showcase lane outcomes in the match details, and winners are highlighted on the minimap (see image above).

Track Your Progress From Match To Match

Perhaps you got a kill on the enemy mid, but they did significantly better than you in regards to last hitting, making up for the deficit of their death? Early kills can be deceptive and can make any player overconfident in how their lane and game is actually going.

There are a lot of similar scenarios, where certain factors and stats can make it seem as if the lane is going one way, even if it is much closer in reality. The added gold from a tower kill isn’t reflected on any scoreboard, making it easy to lose track of it.

Then there are cases where being behind in farm and xp doesn’t immediately mean one lost the lane. A solo offlaner against a trilane is bound to lose out on xp and gold, comparatively, but that’s where our lane indicator steps in. Perhaps the offlaner has kept the supports so busy that they themselves were unable to farm or the offlaner died only once, getting a lot of xp and gold in the process.

SumaiL's Lina is not an easy foe to take on.

In order to improve one’s laning stage however, players need to be able to track their progress, which is why the “/matches” tab of every Plus Subscriber will now also have a lane tab. Lanes will now be part of the recently introduced match comparison tool, making it easier to track how well you’re doing across multiple games.

This way, it should be easier to see what match-ups you do really well in, and in which match-ups a bit of practice could go a long way. More importantly however, you can better track by how much you’ve won your lane. Was networth the deciding factor here, or did you do an excellent job at leeching xp in the offlane?

If you were up against a dual lane, how well did you do still? Was your last hitting still admirable, or did you perhaps even outfarm the opponent? How much xp did you get out of the lane? And if you were part of a dual lane yourself, how well did you zone out the enemy? Did they get a lot of gold, or were you able to shut them down?

Improving on your laning stage has never been easier, so why not take a look at your own matches? The lane outcome will be available to anyone for any TrueSight parsed match, but the match comparison tool is only accessible for Plus users.

Subscribe to Plus today to track your laning progress! Now once was okay, but now you're making another shilling article for the same Plus update as before? It's a brand new feature which ties into something we released previously. And we've made it available to all TrueSight analyzed matches whether you have Plus or not -- check out a match you've played recently! @AvoNKrad, Yeah, shame on a business for advertising their products that no one forced them to make but give you more options as a Dota player.

Nah, it's my misunderstanding, I thought it's the same update, and not a new feature addition for it.
My bad there. Get Plus or u cant play well in the Laning phase! are they disabled? i dont seem to have the option.

Because you already have Plus (thanks!) - give this link a go: https://www.dotabuff.com/players/me/matches?enhance=lane i won io vs viper ez Pretty sure I lost line in this case - https://www.dotabuff.com/matches/3493880043 (Weaver). Only lh 36 creeps in 10 mins staying with sup against 33 lh on Pugna.
I think you:
1) put too much weight into denies (idk about dotabuff you but opendota for sure)
2) not counting gold wasted on heal/mana
3) not considering player role that much (solo offlaner would "lose" most of the time even if he did well).

@kunst: Thanks for your feedback! This lane was very close to being a draw and we'll take your ideas into account as we tune and improve the algorithm. what is the criteria for deciding won/lost lane in the jungle/roaming roles?

if there was an opposing jungler or roamer, we will compare you against them, otherwise we look at a kind of average relative from all players on the opposing team. Is there a way to aggregate the lane info say, you won mid lane 50% of the time in a certain time interval? Is there also a way to add the lane data to match pages?

Thanks Yuma, thought it was something that showed on the overview of the game page, this is even better.

Is there a way to aggregate the lane info say, you won mid lane 50% of the time in a certain time interval? Is there also a way to add the lane data to match pages?

there's no aggregation at the moment, but keep your eye out for the lane data in match pages :) how about support player check mine