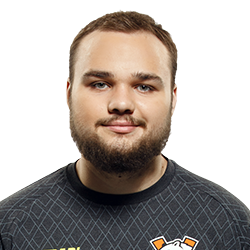 Vladimir "No{o}ne" Minenko rose to fame with Vega Squadron in 2015, standing out as an individually talented player. No{o}ne is known as one of the best mid players in the world, supported for years by a superstar Virtus.pro line-up. It was thanks to his dominant plays against other mids that VP was able to win so many tournaments. He started playing Dota in 2012 and joined his first team in 2014. Since joining VP in 2016, he’s been their star mid player, providing the backbone of their core play. No{o}ne is known for his play on Storm Spirit, Dragon Knight, and Invoker.